The District of Venice, your holidays in Livorno 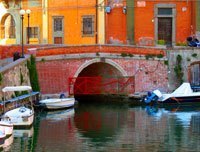 To spend their holidays in different ways and especially recommend the tourist to book at any of hotel, bed and breakfasts and hotels in the district of Venice, Livorno, a splendid view characteristic reminiscent of "real" city on water. The New Venice was founded in 1629 to benefit the needs of merchants of all nationalities who found in this neighborhood adjacent to the port a place of residence for their needs and storage facilities directly accessible from waters Darsena.

The neighborhood was in fact passed through these channels "was" that allowed traders to access with the highest viability at the port. Here were born the first multi-buildings divided into apartments with shops below. Along the canals were built to stop, designed to allow easy movement of goods from their stores to the channels and vice versa.

Tourists on holiday in Livorno has the ability to navigate, with a tour guide, the channels between the Medici, the port, the Old Fortress, the fortress and the New Venice district.

It passes under the Piazza della Repubblica (largest bridge of Europe) along the ancient cellars of the merchants, the palaces in neoclassical style.

The channels and the succession of stop-draw the city of Venice, for this to build the various islands of houses connected by bridges were called Venetian masters.

At the center of the square is the Place of Pius, where the homonymous church. The square owes its name to the presence of houses for young Pie abandoned founded in 1682.

The church of Pius Place, dedicated to the recruitment of Mary, now desecrated and was recently restored. What remains is the facade flanked by a small bell gable. The heart of the neighborhood is via Borra, the most noble and elegant of the city. During housed the offices of the consulates (Antwerp, Bremen, Lubeck, Prussia) and a Monte di Pietà. Some noble building principles and as the reigning Grand Duke of Tuscany Cosimo III and the King of Denmark Frederick IV.

Place the square of Pius also the Via dei Bottini dell'Olio, last of the great works in the city took the Medici. In this building the oils were stored before being marketed.

In the room below, there were over 300 stored the spoils of different sizes, which had a combined capacity of approximately 24,000 barrels of oil (8.000 hl). Made of brick and covered with slate, cubic containers were intended for the storage of labeling with that defined the characteristics of conservation.

Leghorn when merchants opened their stores the Bottini were also used as storage for various grains, wines and other goods. They preserved the function of port storage until 1898, when, following the amendment of the waterway, was buried at the stop Facility, currently under restoration.

The restoration work in recent decades have allowed the recovery of the unique architectural structure. The ground floor was used as exhibition space by the city of Livorno, who organizes and hosts exhibitions and events devoted mostly to contemporary art. Space is inserted into the land of "Networking", a project dedicated to the promotion of young artists with Municipalities of Florence, Livorno, Monsummano Terme, Prato and Siena, and supported by Regione Toscana.

The upper floor houses a section instead of the Biblioteca Comunale Labronica "Francesco Domenico Guerrazzi".

In the square there is the Dominican church of Santa Caterina, founded in 1720. Octagonal in shape at the entrance to a large altarpiece by Giorgio Vasari. The square takes its name from the monastery founded by the Dominicans and converted in prison in 1809 where they were then locked up during Fascism, Sandro Pertini and Ilio Barontini.

Should be noted also the Teatro San Marco, which hosted the founding congress of the Communist Party, the Ponte di Marmo which preserves a series of etchings made by the "beolinai," the boatmen that traffic along the canals and the Palazzo Finocchietti typical example of building the eighteenth century Venice Nuon.