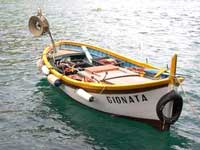 When the old port of Pisa became unusable now because dell'insabbiamento, was built the Port inlet Mediceo exploiting natural. With the rise of industries and shipyards, the landscape has radically changed. In fact is very difficult to imagine the original design, even if the moles appear many modern features of the ancient walls of red brick.

In the draft of Cosimo I had planned to build a pier that go until Fanale of Pisani, and another that this came from the Old Fortress. Ferdinand I put in place the construction of the first leg, which was interrupted, however, on the cliff of Sassaia is the so-called arm Ferdinandea.

Access to the port from the bridge happens dell'Arsenale, which ends next to an old customs in the calling area where ferries to the islands of Tuscany. The entrance you can see the dam straight and curvilinear, a Vegliaia that of the south, the tower of Marzocco and the Tower of Meloria.

In early'500 Antonio and Giuliano Sangallo redassero ordered by Giulio de 'Medici revising the draft of the fortress overlooking the port of Livorno. It is composed of a massive tower of the ninth century, said Mastio Matilde, and the fourteenth-century fortress that surrounds it.

Completed in 1534, the fort has a perimeter of 1,500 meters and holds its Internal 3 bastions: the west who took the name of Canaviglia, the bastion of Ampolletta, facing the square of the old fortress and decorated with a lion's head and the bastion of Capitana.
Within the itinerary of tours winds through the courts, patrol the roads and gunner.

The walls are brick, which gives them their characteristic pink color, listing in stone.
To the south of the old fortress is the Darsena Medici, once the port of Pamiglione, from where, in centuries past, leaving many merchants and couriers directly to the main European courts, but also to East and the Americas. Today the dock is home to the fishing fleet Leghorn and the lookouts of the Guardia di Finanza and the Fire Brigade.