History of Livorno, information for tourists 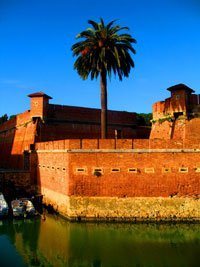 Tourists who chose Livorno as their vacation destination remain fascinated by its history, typical of those tourist cities that are born from the meeting of cultures, languages and different faces.

Livorno's origins date back to the Romans but the port was built under Cosimo I, Grand Duke of Tuscany, in Pisa alternative to the port was insabbiando. To ensure a landlocked Grand maeatro instructed the Renaissance of Bernardo Buontalenti build an "ideal city", that is planned to build a new city around the fortified town Labronico original, with an impressive system of moats and ramparts.

The progressive burial of the nearby Porto Pisano, coincided with the emergence of village Leghorn that was transformed into a point of reference for navigation and a center of international trade with between the thirteenth and fourteenth century, a system fortifications and a majestic lighthouse, known as Fanale of Pisani.

Later the Dukes doctors declared him free port and gave a rather libertarian statute that led to a proliferation of commercial activities often associated with intense port activities.
This was a smart move that called Jews, Greeks, Spanish Muslims, Catholics and British cosmopolitan crowd of other exiles who transformed in Tangiers at the time.

The population of the city was also aided elapses between 1590 and 1603, the so-called "Read Livornine", which ensured for the people of Livorno, freedom of worship and religious profession and politics anyone had been found guilty of any offense (with some exceptions, including the murder and "fake money").

The donation of the Grand Duchy of Tuscany became the city of Livorno a safe haven for many communities forced to leave the places of origin because of persecution ethnic, racial, religious and political. Thus came Jews, Armenians, Greeks who contributed greatly to the cultural and intellectual development of the city.

That is why the story of Livorno was influenced by traditions and customs of different ethnic groups who settled in Livorno when the Dukes decided to make a square Merchant cosmopolitan.
It can be said that Livorno has a story but many stories as there are many people today are descended from the Leghorn.

In the eighteenth century, under the dynasty of Lorraine, there was a proliferation of the arts in general and in particular industries; here were published crimes and penalties of Cesare Beccaria and, in 1770 the third edition of 'Encyclopédie ou Dictionnaire des Sciences raisonné , Des Arts et des Mètieres of Diderot and D'Alembert.

The beginning of the twentieth century led to a flourishing of many projects and urban architettonci: the elegant seaside resorts and spas, which had Livorno one of the most popular tourist destinations since the first half of the new railway station of the line Livorno -- Plans for Cecina and rehabilitation center.